The Kenai Peninsula Borough (KPB) issued a Local Disaster Declaration starting November 27, 2019, and continuing as of this date, because numerous areas of the Kenai Peninsula Borough outside of the cities and in the City of Seldovia sustained severe damage caused by an ongoing weather storm. Additionally, the declaration identifies the snow storm commencing December 2, 2019 when heavy snow fell throughout the central peninsula, causing widespread power outages. Many areas were without power for periods lasting from many hours to several days.

Mayor Pierce is also requesting assistance to mitigate damage from the imminent threat of the upcoming weather system that is forecasted this weekend. The National Oceanic and Atmospheric Administration is predicting threat of flooding and related widespread and severe damage due to heavy rain predicted in widespread areas of the borough beginning December 6, 2019 and continuing into December 10, 2019. Freezing levels are expected to rise from sea level to 3,000 to 4,000 feet. This rainstorm is expected to cause more powerline damages and other property damage due to trees falling, the freezing levels and slick conditions. According to the National Weather Service, another storm is expected to hit many areas of the borough with high winds from the east beginning approximately Monday, December 9, 2019.

The Borough continues to provide incident management and basic resources to monitor conditions, to coordinate emergency actions and repairs as needed. The Borough’s local disaster declaration initiates a request for a State Declaration. The request to Governor Michael J. Dunleavy asks for activation of state public assistance program to address ongoing emergency needs in the City of Seldovia and across the borough. The Borough Office of Emergency Management is responsible for coordinating the resources and entities contributing to the management of this emergency.

The Kenai Peninsula Borough and the City of Seldovia Local Emergency Declarations can be viewed at: https://tinyurl.com/12062019-KPB-Dec 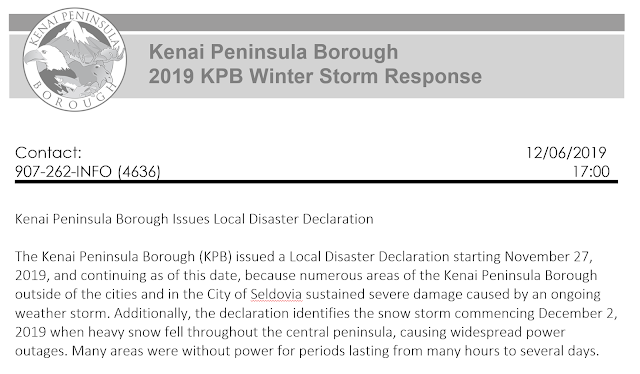