06/26/15 10:20 am Firefighter doing well after bear encounter due to training and emergency response

Cooper Landing – On June 22, 2015 Chugach National Forest, Glacier District Ranger Tim Charnon had an encounter with a sub-adult brown bear.  He is doing well because of bear awareness training and emergency response protocols.

The Chugach NF provides extensive training for employees on how to react to bears.  Response depends on the situation such as whether the bear is predatory or whether it has been startled, thus provoking a territorial reaction.

Charnon startled the bear while scouting the fire in a remote area near Juneau Lake.  When he first observed the bear, it was charging and there was not enough time to deploy his bear spray.  The bear swiped at Charnon knocking off his helmet.  Falling back on his training, Charnon grabbed his helmet, covered his head and dropped to the ground.  The bear swiped and bit him and ran off.  Charnon remained in place and radioed for help.

Charnon's call alerted crew members from Montana's Lolo Type 2 IA Crew. They worked through steep, rugged terrain to reach Charnon and help him walk about a mile to a rendezvous site.  Assessment of the victim at that site led to the decision to use the most direct transport via Life Med. 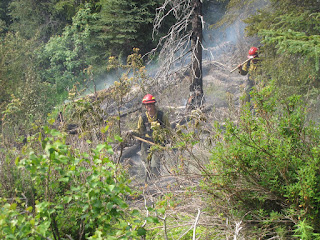 Firefighting is an inherently dangerous activity.  Agencies continually work to mitigate dangers through training firefighters for encounters with hazards, and providing emergency response leadership and support.
Posted by KPB OEM at 10:23 AM