Five fires started June 5, 2019 with four on the Kenai National Wildlife Refuge ("Refuge")) after 128 lightning strikes were reported on the Kenai Peninsula. None of these fires are located close to any structures.

The Watson Lake Fire (#177) was reported near mile 71 of the Sterling Hwy. It had heavy rain fall after the report, and is being patrolled but no smoke was seen this morning.

The Mile 70 Powerline Fire (#178) measured .1 acre after suppression efforts and the fire is in monitor status.

The 10 acre Swan Lake Fire (#181) is located in a limited suppression area north of the Sterling Highway, adjacent to the East Fork Fire scar, Lily Lake Fire Scar and Sterling Fuel Break.  No values of risk are threatened at this time.

The Kolomin Lake Fire (#180) is south of Tustumena Lake, measured 1.2 acre  and there are six personnel from Pioneer Peak IHC on scene.  Although this is a limited suppression area,  the Refuge approved a non-traditional response given its close proximity to Full and Critical Response areas.

The Tustumena Lake Fire (#179) is not on Refuge Land but is closest to human structures to the southwest of the Lake, measured at 126 acres. No structures are in immediate danger. 15 personnel were ordered, including one load of smokejumpers and two firecrews. Currently there are now 42 personnel assigned to the Fire. 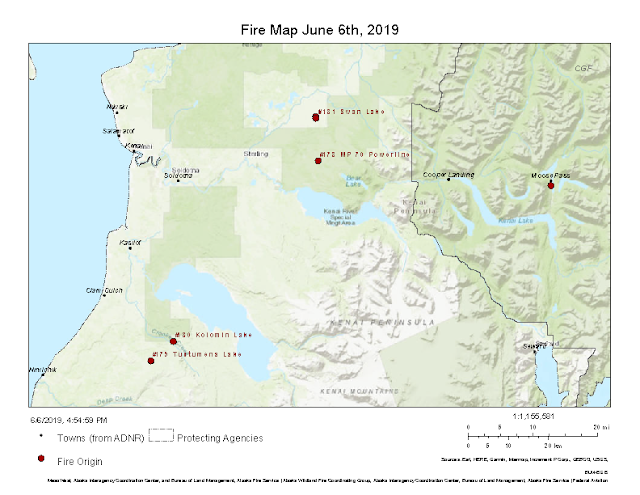 Posted by Brenda Ahlberg at 8:34 AM