Law enforcement officers from Kenai National Wildlife Refuges assisted two motorists last night as they were managing traffic on the Sterling Highway on a stretch of road where smoke and flames from the Swan Lake Fire has resulted in intermittent delays and pilot car operations to ensure driver safety. The officers on site are coordinating with firefighters working along the roadway to determine when the road is passable and when delays or pilot cars are necessary.

After the road had reopened about 9 p.m., with pilot cars escorting motorist through smoky conditions, Alaska State Trooper dispatch received a report of high winds increasing fire activity near the road and reduced visibility from smoke. Refuge officers on site were immediately notified by dispatchers and proceeded to hold northbound traffic waiting to pass, and clear remaining southbound traffic that had been led through the area by a pilot car. They encountered a motorist with several children who reported abandoning a van due to smoky conditions. Officers located the vehicle as they were clearing the road of traffic and, with the help of firefighters, moved it out of harm’s way.
In a separate unrelated incident, an SUV outside the fire area experienced an electrical fire, which was extinguished with a quart of milk the driver had on hand. One of the Refuge officers assisted the driver with getting the vehicle towed to a repair shop.

Motorists are reminded to obey all traffic control officials and avoid stopping on the road, for the safety of themselves, other drivers, and firefighters working in the area. Keeping windows rolled up and outside air vents closed is also recommended, due to potentially smoky conditions. 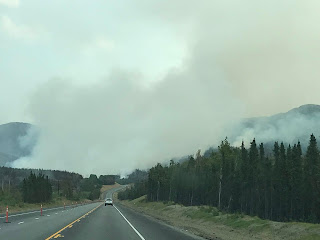